Report on our fundraising activities in 2018

We pursue two projects that raise money for other high-impact charities: Raising for Effective Giving (REG) and a regranting service. REG is a fundraising project aimed at the professional poker community, high-stakes players in particular. With our regranting service, we enable donors to take advantage of tax deductions. Because we are a charitable organization in Germany, Switzerland, and the Netherlands, donors in these countries can make tax-deductible contributions to high-impact charities which do not have charitable status in the home countries of the donors. They make a tax-deductible donation to us, the Effective Altruism Foundation, and we, in turn, regrant their donations to highly effective charities.[1] To this end, we processed 5,867 individual donations last year. These donations are separate from any donations we processed as part of our project Raising for Effective Giving.

Last year, we also invested about 100 hours each into testing various fundraising efforts in the blockchain community and in the community of German (would-be) philanthropists. We ultimately decided against pursuing this further. The main reasons were:

I want to thank Alfredo Parra, Kim Korte, and Thomas Moispointner for their help over the past year with all of these projects. Without their efforts, this would not have been possible.

With Raising for Effective Giving, we accounted for counterfactual giving in the following way: We counted donations made through our main website as influenced by us. We sometimes also did so when donors gave to our recommended charities directly. In the latter case, we included the donation if the donor confirmed to us that our influence was essential. This metric leaves out any donations to our recommended charities from people who never get in touch with us (also see our FAQ on this question).  However, this also assumes that the donors would not have learned about effective altruism or effective giving otherwise. Some likely would have. We have not attempted to account for either of these effects but given the dominant role REG has played in the charitable giving of the poker community, both strike us as fairly minor.

In 2018, most donations came from the Double Up Drive we helped run in December. We registered total donations of $5,437,174 from this campaign. In the end, however, we counted only $3,251,377 (60%) as having been influenced by us. As a first step, we counted all the matching funds that had been provided ($2,718,587) because the matchers learned about effective altruism through Raising for Effective Giving. However, the Double Up Drive had also been advertised by the charities themselves. So it’s very likely that some people contributed to the matching challenge who would have made a donation in any case. For all donors ≥$10,000, we individually estimated the share that they would have donated anyways by looking at their donation history as well as inquiring with the donor in question and the charity they gave to. We conservatively assumed that only 10% was due to the matching challenge if we had no information whatsoever. The resulting average was 15%. From this set of donors, we extrapolated to all the remaining ones (<$10,000) we had no prior information on by using this average.

Since these donations are not the result of a dedicated fundraising effort, it’s likely that a significant portion of the total would have been donated in any case, even if we had not provided this service. We used a simple model to account for this counterfactual giving: While donors would not have been able to deduct the donations from their taxable income (or take advantage from similar tax schemes), it’s unlikely that this would have caused them to donate nothing whatsoever. However, they would donate less without the deduction since their taxable income increases, which in turn increases their taxes. This effectively represents a price increase for the donation. This increase is determined by the effective marginal tax rate, which in turn depends on the income of the donor and the size of the donation. The relationship between price increase and the corresponding change in quantity is governed by price elasticity (PE). For simplicity, we’ll assume a price elasticity of –1, i.e. unitary elasticity. We’re using the formula for arc elasticity which takes the price elasticity at the midpoint between the two relevant values on the demand curve. We are not very confident that this is the right way to approach this effect but didn’t want to invest additional time into checking alternative methods in detail. If others in the community have a stronger grasp of these issues, we’d appreciate all feedback. The basic formula is as follows:

Solving for C, we arrive at:

The effective marginal tax rate differs from country to country, and from state to state in some cases.

Using these numbers, we arrive at ~$385,609 (15.5%) as having being donated due to us providing this service. This likely underestimates the impact: From what we can tell, the studies on the price elasticity of donations were mainly done on changes to the tax code, not changes to the charitable status of individual charities. In the latter case, we’d expect significant substitution effects because donors decide to support other charities. In this case, they might donate to considerably less effective charities which are, however, tax deductible in their respective countries. There are also some other effects that Rethink Priorities has looked into for their study on the impact of RC Forward.

We estimate the 2018 expenses for both projects to be $171,263.[3] We can only estimate this number because the staff members involved in these projects also have other responsibilities within the Effective Altruism Foundation. We also stopped accounting for expenses on a project-level in 2018 since the Effective Altruism Foundation has become a lot more integrated. So expenses cannot be neatly attributed to one project or another. Our estimate is based on figures from previous years and estimates of the relevant staff members on how much time they spent on the projects in question.

To account for opportunity costs, we took the estimated 1.5 full-time equivalents dedicated to these two projects in 2018 and multiplied them with $250,000, a crude estimate for a very well-paid earning to give opportunity. This results in an opportunity cost estimate of $375,000. Assuming the same split between projects (40/60), we get $150,000 for REG and $225,000 for our regranting service. 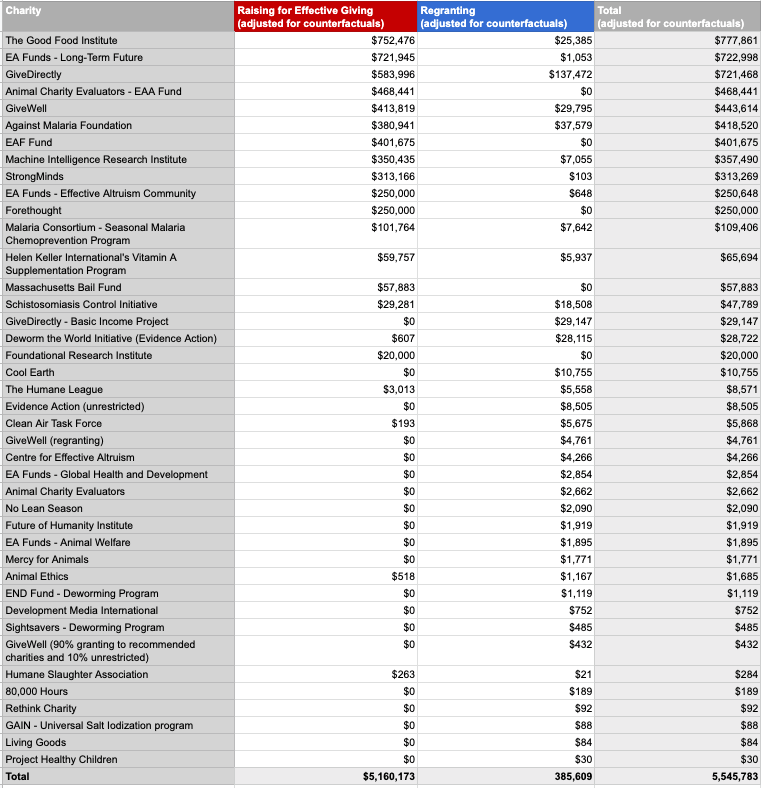 Our fundraising projects have had continual growth over the past few years, with money raised increasing even faster than the associated expenses. Last year we even saw a decrease in expenses because we invested considerably less staff time into Raising for Effective Giving. We didn’t try to find many new donors and focused on maintaining the most important existing relationships instead. 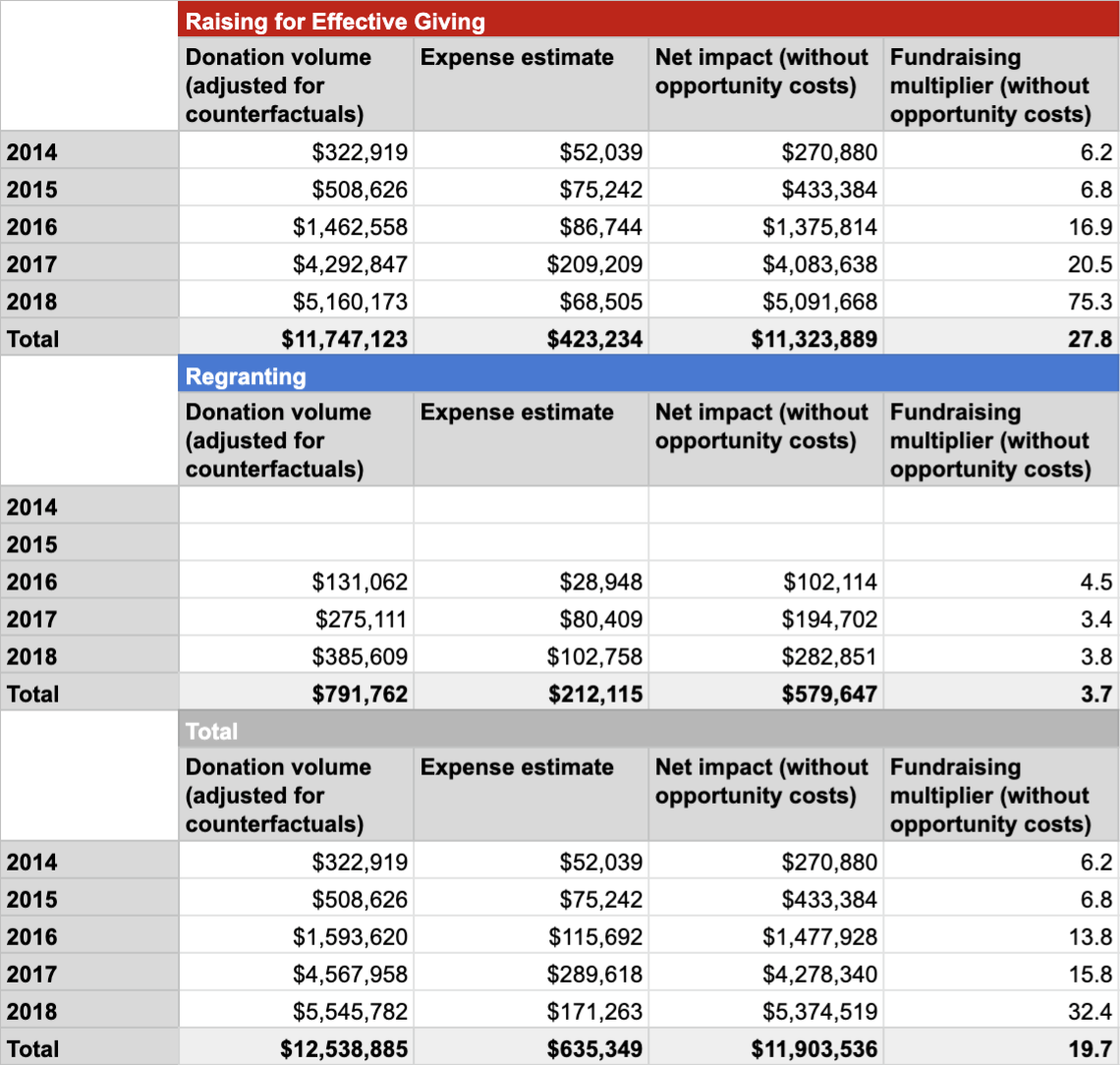 Some clarifying endnotes on this table.[4] 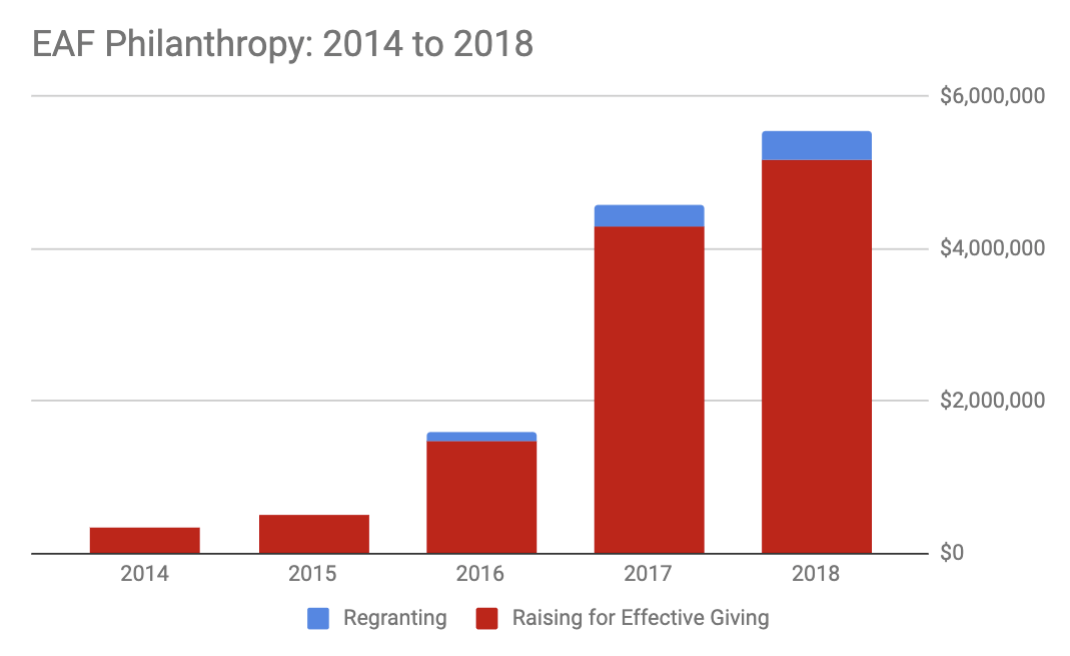 Going forward, we intend to maintain our philanthropic activities at the current level. We will continue to provide a donation infrastructure for German, Swiss, and Dutch donors. We will maintain Raising for Effective Giving, focusing on the most important relationships and opportunities.

We will focus much more on research compared to previous years. For instance, we hosted a workshop on s-risks in Berlin last month and will be hosting another one in May in the Bay Area.

[1] Since we are not a fiduciary, we cannot legally commit to forwarding any donations to the desired charities. However, we very strongly take into account the wishes of the donors when regranting donations, and have always done so in the past. [2] After briefly reviewing the evidence on this, this seems about right. The only meta-analysis we could find gives a mean elasticity of –1.44 (standard deviation of 1.21). When the meta-analysis excluded outliers, they found an elasticity of –1.11. However, this report seems to suggest that such a high elasticity likely overstates the real effects. [3] This includes time spent exploring fundraising efforts in the blockchain community and in the community of German (would-be) philanthropists. [4] The numbers for REG differ slightly from the ones in the respective annual reports for 2014 and 2015. That’s because we decided to retroactively exclude donations made to either REG or EAF during those years. We also decided not to include estimates for opportunity costs since for previous years, we don’t have reliable estimates for full-time equivalents dedicated to these projects. We estimated the counterfactuals for regranting donations by using the same marginal tax rates estimates as for 2018 and adjusting based on the donation volume per country for that year.