Effective Altruism Foundation (EAF) strives for full transparency. This page serves as a comprehensive overview of EAF’s activities and finances.

EAF is a charitable foundation located in Basel, Switzerland, and London, United Kingdom. Its board members are Ruairí Donnelly (President), Max Daniel (Vice President), David Althaus, Tobias Baumann, and Linh Chi Nguyen. EAF’s purpose, according to its foundation charter, is as follows:

Article 2: Purpose
The Foundation’s purpose is to improve the quality of the lives of as many sentient beings as extensively as possible, making use of scientific methods in order to do so. As a think tank, it contributes to the development of fundamental understandings of effective ethical behavior and action.
In particular, it is committed to evidence-based poverty reduction, the reduction of animal suffering, the improvement of international cooperation and stability, and the promotion of responsible approaches to future technologies. It promotes the philosophy and social movement effective altruism. The Foundation is active domestically and internationally.
The Foundation pursues no commercial interest and is exclusively not-for-profit.
Pursuant to Article 86a of the Swiss Civil Code (ZGB), the founder explicitly reserves the right to change the Foundation’s purpose.

We receive the majority of our funding from individual supporters who pledged to donate a percentage of their income to effective charities. We have also received support from the Open Philanthropy Project. We are independent and do not receive significant contributions from other institutional donors.

Foundation based in Basel, Switzerland

Club based in Berlin, Germany

In 2020, EAF expects to spend its funds as follows:

In 2017, total expenses by project were as follows:

In 2016, total expenses by project were as follows: 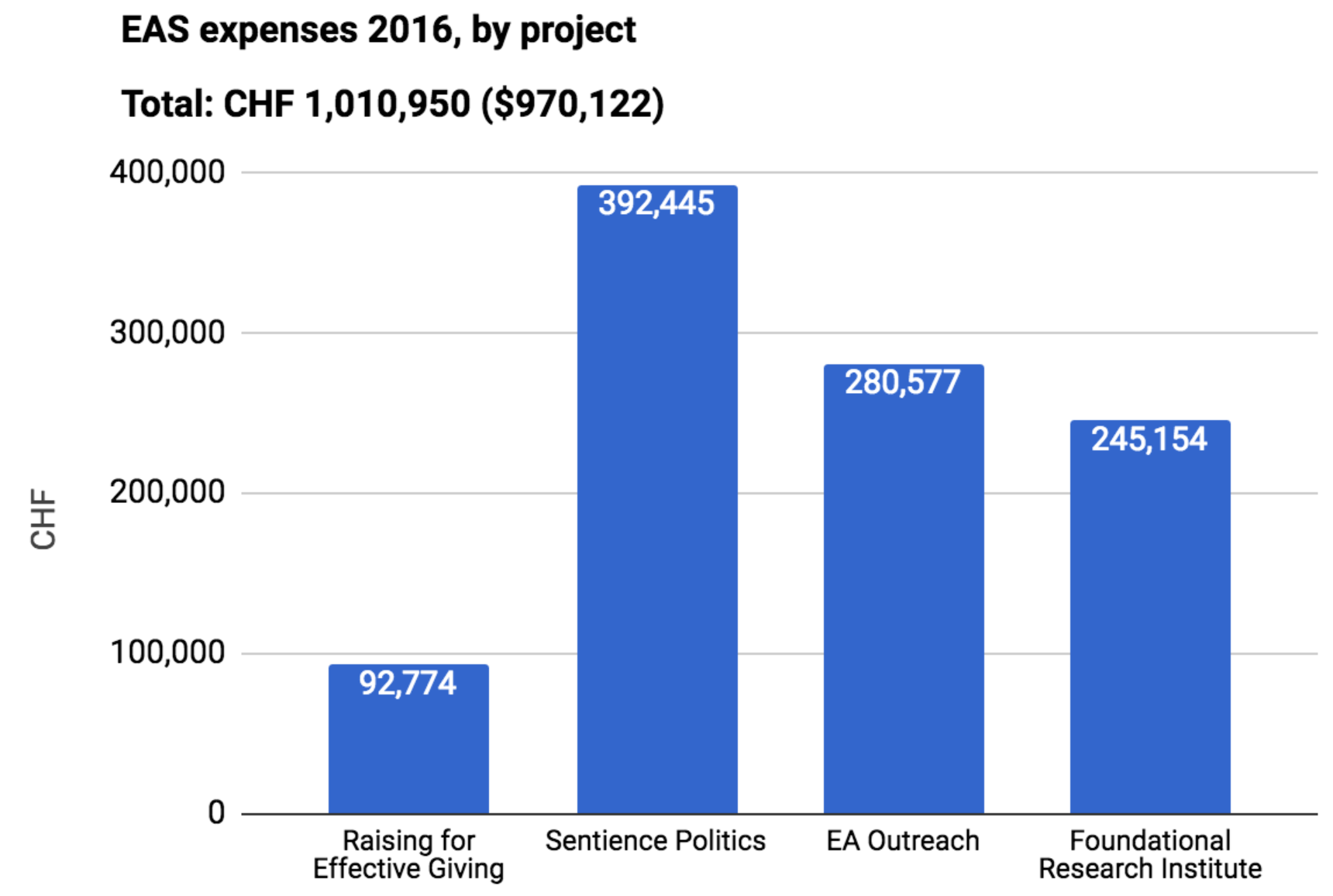 In 2015, total expenses by project were as follows:

All amounts are in Swiss francs (CHF).

Research
GBS Switzerland conducts research in collaboration with the Foundational Research Institute (FRI). Research has been published on two platforms:

In 2014, donations to GBS Switzerland and EACH were allocated as follows:

All amounts are in Swiss francs (CHF).

In 2013, about 70% of all expenses were used as grants to other organizations and about 25% were spent for the project “Sentience Politics”. 93% of all income was donations from individuals; the remaining 7% was membership fees.

Maintained as a separate document.

EAF aims to effectively identify, disclose and manage any actual, potential, or perceived conflicts of interest to protect the integrity of EAF and manage risk.

A conflict of interest occurs when someone’s personal interests conflict with their responsibility to act in the best interests of EAF. Personal interests include direct interests as well as those of family, friends, or other organizations a person may be involved with or have an interest in (for example, as a shareholder). It also includes a conflict between a board member’s duty to EAF and another duty that the board member has (for example, to another charity).

These situations present the risk that a person will make a decision based on, or affected by, these influences, rather than in the best interests of the charity, and must be managed accordingly. The board is responsible for identifying, disclosing, and managing conflicts of interest across the charity.

While we understand that these conflicts of interest have downsides, we value the strong commitment of the current board members—both concerning time investment as well as their depth of understanding of EAF’s mission—and think that the benefits outweigh the costs.